Over the last couple of weeks I’ve had lots of enquiries about the Momo challenge; people are understandably concerned and I don’t blame them, if my children were younger this type of thing would concern me too.

What is the Momo challenge and is it a real thing?

Firstly, Momo, a creature that is going to kill people or contact children is a hoax, an urban myth. Urban myths surrounding Momo have been circulating online since 2016. The character Momo was a sculpture called Mother Bird, created for an art exhibition in Japan in 2016, and it’s pretty creepy looking with long black hair, bulging eyes and the body of a bird. The sinister nature of this sculpture has seen a plethora of stories circulating, one of which is that Momo is contacting children via WhatsApp, threatening them, and getting them to carry out so-called challenges such as self-harm and even suicide.

The fact is, as with other so-called challenges such as the blue whale challenge, nobody knows the true facts behind any of this, but all the reports and articles I have read suggest me to believe this is a simple social engineering tactic to create fear (see also the excellent article from Cath Knibbs, The Human Algorithm HERE). This is why I said above that Momo is mostly a hoax, but children are undoubtedly being contacted by people/accounts pretending to be Momo. The fact that fear is being created is very real, albeit fuelled by alarmist clickbait media reporting and idiotic YouTube influencers and pranksters.

How is it spreading?

Paradoxically, I know I’m adding to the viral nature simply by writing this article, but I’ve been inundated with so many requests I can’t ignore it.

Urban myths like this go viral very quickly. The sinister nature of the character and the horrific stories spread like wildfire in a number of ways, which all feed the viral nature:

Parents will hear of this and understandably share with other parents as a warning; I have seen countless warnings on my own social media timelines. 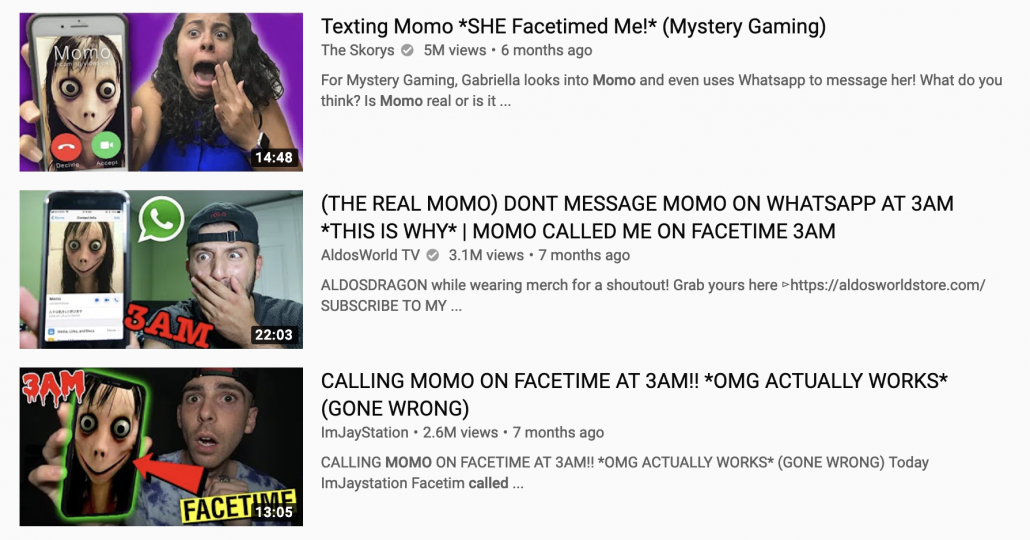 As with anything such as this, there isn’t a single piece of advice that will satisfy or help everybody, so I have split it up as follows:

For schools, parents and carers

If something like this is reported to you, as sinister and shocking as you might find it, be careful with your reaction; children will react in the way that you react. Don’t fob it off, but treat it in a light-hearted and upbeat way. Tell them how fantastic they are for letting you know, that you’ll do some fact checking and get back to them.

It is highly likely that many of your children have either heard of this, with a smaller number who might have seen something about it, particularly on YouTube. These urban myths are going round all the time and you can’t respond to every single one.

Should you be proactive or reactive?

In an ideal world we would be proactive, but raising issues such as this with children may feed curiosity, which is the very nature of children. If a child happens to mention it in class and it’s overheard by the other children you will have to tackle it. Have a 10 minute circle time to discuss it. Again come at it from an upbeat, light-hearted angle and let the children talk.

Because of the nature of things like this you may feel pressurized into responding to parents, but the advice is don’t if you can help it. For more information on this please refer to the excellent articles and advice by London Grid for Learning (https://safeblog.lgfl.net/2018/11/parents-scare-or-prepare/ ) and Kent County Council (https://www.theeducationpeople.org/blog/online-safety-alerts-think-before-you-scare-updated-2019/ )

If you find yourself in a position where parents are demanding answers to this particular concern, feel free to use the text from this article as part of your school newsletter.

It is a sad reality that children are going to see things online that they don’t want to see, and we don’t want them to see it. You can put as many technical restrictions, blocks, anti-virus and other so-called solutions on your devices and lock your house down like Fort Knox, but these things will get through. It isn’t right, it isn’t fair, but it’s true.